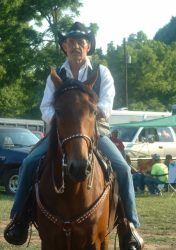 His visitation will be two hours prior to the service at the funeral home.

Johnny Dale Taylor of Birch River passed away Monday, August 1, 2022, at the age of 69, lovingly surrounded by his family.

He was born on September 28, 1952 in Twenty Mile, Nicholas County. He was a veteran of the U.S. Army. Johnny Dale was a lineman until he retired after 46 years but retirement was not for him. He kept himself busy working at Southern States of Gassaway for the past two years. He loved working at the store and would come home and tell stories about his days and about his friends and the people he met there.

Anyone who knew Johnny Dale knew that he worked hard all his life. From sunup to sundown whether it was at work, on his farm, in the garden, or helping a
friend or neighbor. He had a generous heart and never hesitated to help people out when they needed it. There also was not a baby or child that he did not claim as his own. Because he was a big kid at heart, they all loved him right back.

Johnny Dale loved being a papaw and spending time with his grandchildren. He could talk about them all day. You could find him with his friends every Saturday having shooting matches in his shooting shack. Johnny Dale was a little guy and became known as “little britches” to his friends. He enjoyed working his farm and was proud of all the hard work he had put into it and what it had become.

Loved ones that cleared the path for Johnny Dale are his parents, Walter Elliott Taylor and Ruby Emogene Brown Taylor, and his sister, Sonja V. Hosey.

Loved ones that will miss Johnny Dale until they meet again are his wife, Debbie Jean Taylor; his son, Johnny (Robin) Taylor, Jr.; his daughters, Stephanie Hayhurst and Jamie Greer; his stepdaughter, Amanda Roberts, his nephew, Jonathan (Rachel) Bragg who he loved as if he were a son of his own; his grandchildren, Jodi (Andy) Adkins, Bethany Martin, Dyllen “Bubby” Williams, Skyler “Raynie” Hayhurst, Brantley Bragg, Satara Greer, Nathaniel “Peanut” Moyers, Warren Neff, Jaxson Neff, Emma Greer; his great-granchildren, Hunter Adkins and Isabella Adkins; his sisters, Shelby (Ron) Hoover, Faye Bragg, Kathy (Tim) Moore, Donna (Tom) Williams, Joyce Flanagan and Terry Clark, Kay (Chuck) Tenney; his brother, Mike Taylor; as well as his extended family and an abundance of friends. He will forever be in their hearts and missed very much every day. The world will not be the same. Until we are together again one day, as Johnny Dale would say “Later…”

His visitation will be two hours prior to the service at the funeral home.