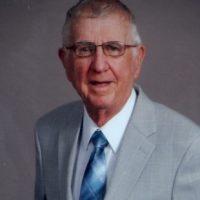 Private family service will be at the Richmond Chapel Church, Chapel, WV.  Interment will be in the church cemetery.

John was born in Chapel, West Virginia to the late Jay C. Gerwig and Pearl Perkins Gerwig. He earned a B.S. Degree in Agronomy and a M.S. in Soils from West Virginia University. He received his Ph.D. in Agronomy from Rutgers University, New Jersey. He grew up on a livestock farm in West Virginia and while studying for his Master’s Degree taught vocational agriculture and managed a dairy farm in Uniontown, PA. From 1952 to 1956 he was on the teaching and research faculty at Rutgers University while studying for his doctorate degree. In 1956 he was appointed Extension Specialist in Agronomy for Rutgers Cooperative Extension. In 1962 he was appointed Dean and Director of Rutgers Cooperative Extension, a position he held until his retirement in 1992. At the time of his retirement as Professor Emeritus he was the longest serving Director of Extension in the Country. He received numerous achievement awards during his life time one of which was the Rutgers University Award which is the highest award given by Rutgers University and given to a very limited number of recipients. He moved to Whispering Pines in 1996. He was an excellent golfer and at one point in his golfing career won two Club Championships in one day from two different clubs. As his golfing buddies would attest, he was an outstanding chipper and putter. Also an avid gardener, in addition to his own extensive garden in Whispering Pines, for 15 years he wrote a monthly article called, “Tips for the Gardener” for The Pitch, a community paper published in Whispering Pines. He is a member of the Country Club of Whispering Pines. And, has been an International Member of Royal Dornoch Golf Club, Dornoch for over 25 years. He was a veteran of the US Army Air Force.

John married Margie Lee McClung in 1949. They had 4 children. She predeceased him in 1985. He was also preceded in death by his parents, brother, Ivan who was killed in World War II, brother, George, and sister, Leo Gerwig Skidmore

Private family service will be at the Richmond Chapel Church, Chapel, WV.  Interment will be in the church cemetery.