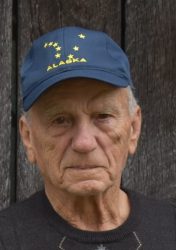 He was born in Duck, WV on Aug 7, 1932 to the late Shirley and Ona Duffield Pettit where he grew up within a close family among 4 brothers and 2 sisters.

In addition to his parents, he was preceded in death by his brothers, Elkins, George, Noble and Lawrence “Hank” Pettit; sisters, Clara “Toots” Stonestreet and Ruth Ellen Pugh.

He moved to Ohio and started work at Goodyear Tire & Rubber where he built race car tires until he retired in 1994 after 44 years of service.  He was a hard worker and rarely called in sick, usually taking his vacations for hunting or fishing trips.

He entered into the eighth generation of his life healthy and active.  He was an avid outdoorsman and enjoyed putting in a vegetable garden, hunting and fishing-especially catching a mess of bluegill.   He enjoyed going to the casino to try his luck and kicking back in his recliner with a hot cup of coffee to watch a western or a late night round of boxing with his nephew, Jake.  He enjoyed visits with family and friends to reminisce.

In lieu of flowers, plant Bill a tomato plant in your garden in his memory.